Will You Be My Methodious? 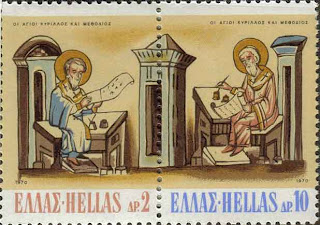 Today, the Church celebrates the feast of Sts. Cyril and Methodious. The rest of the United States is celebrating St. Valentine's Day.

I'm not quite sure why St. Valentine isn't on the liturgical calender, as he seems to be the object of so much popular devotion (or at least pseudo-devotion). I had always heard that he was a Catholic priest in ancient Rome who helped couples by witnessing their Christian marriages, and that he was later martyred. Perhaps when they reformed the calender they determined these legends to be overly apocryphal. Oh, well.

But Sts. Cyril and Methodious are interesting, too, and they're also historically important. Not to mention the fact that they actually existed. They are mainly famous for preaching the Gospel to the Slavic nations, a byproduct of which was their invention of the Cyrillic (a.k.a. the "Russian") alphabet.

A seminarian friend asked me today, jokingly, "Will you be my Methodious?" To which I could only respond, "If you'll be my Cyril!"

I decided that I am definitely going to make cards along this theme for next year, as it's the perfect "St. Valentine's Day" greeting for those of us who aren't dating for spiritual reasons! Sts. Cyril and Methodious were friends whose friendship was based on Jesus Christ, and this bore fruit in the conversion of an entire culture. I find this to be an excellent example for me as I value my own friendships.
Posted by Sponsa Christi at 8:58 PM 1 comment: 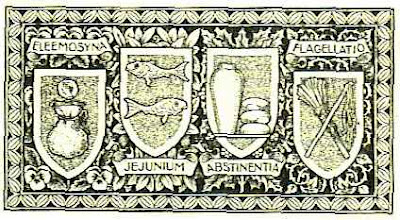 I have been wishing everyone here at school a happy Ash Wednesday. Not surprisingly, I've gotten a few protests that Ash Wednesday isn't a "happy" day.

Maybe these people were a little cranky from fasting, but I beg to differ! For the past couple of days friends and I have spent our lunch conversations deciding on a "top ten" list of great things about Lent:

10. Purple is a much more elegant liturgical color than green.

9.You can save money on all the food you won't be eating--although you should probably be giving this to the poor!

8. All the good fish recipes come out of the woodwork.

7. A convenient excuse to watch The Passion of the Christ. (I've heard in some places they even bring it back into theaters.)

6.Catholic camaraderie. E.g., when you see someone else with ashes today, you know they were at Mass, too!

5. You don't need to hide or make excuses around your penance and sacrifices--because everyone else is supposed to be doing the same thing.

4. Priests are generally more enthusiastic to hear confessions--so I don't have to worry about becoming the "scourge of the clergy" by going frequently.

3. More opportunities for organized communal prayer, especially on the campus of a Catholic university.

and the #1 coolest thing about Lent...

...is the chance to become closer to Jesus Christ!

Some of our list items are silly, but we really should be excited about the chance to renew our spiritual life. So I will continue to wish everyone a happy Lent.
Posted by Sponsa Christi at 8:30 PM 1 comment:

"Super Tuesday" and the March for Life 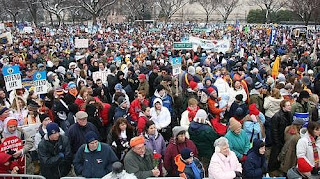 I was able to go home and visit my parents this weekend, so I had a chance to fill them in on some of my "adventures" this semester. Among other things, I told them about the trip I took two weeks ago with my school's campus ministry to Washington D.C. for the March for Life.

Apparently, my mother had heard that there was an unremarkable turnout, and that there were plenty of counter-protesters.

I don't know where she got that news. First, I didn't see a single pro-choice protester--my thought is that if you were carrying a pro-abortion sign, everyone would just have assumed that the "don't" or "stop" part of your poster had fallen off!

In my group, we heard that there were 200,000 people at the march, and I certainly believe it. I don't think I've ever seen that many people in one place before. And the funny thing is, you still manage to find people you know (even from other regions of the country) unexpectedly in the crowd. While I was there, it occurred to me that Heaven might be a little similar in this regard: billions and billions of people, but you still manage to find your friends and connect with people personally. But this was just a thought.

Of course, most of the day was far from heavenly. For one thing, it's sad that we have to come out and march in the first place. Also, January 22 was declared a national day of penance by the U.S. bishops, and I can assure you that the day was adequately penitential for everyone in my group.

We had a LONG and grueling trip by bus and train, and we spent a lot of time standing in cold and rainy weather (and I had a migraine on the way home). But in one sense, I was almost grateful for these trying conditions. They made our being there more meaningful. I think it says a lot when people, especially young people, are willing to put up with this discomfort in order to take a stand on what they believe.

At the end of the march, there was a huge rainbow across the sky (and some say over the Supreme Court building, but I wasn't there at the time). A friend of mine said that this was the first rainbow he had ever seen in D.C. We're all hoping it's a sign!

Participating in the March for Life was a great thing to do as a Catholic, but also as an American citizen. I'm sure that all the marchers will bring their convictions into the voting booth with them on this "Super Tuesday". Today let's pray that more people--especially Catholics--will listen to their consciences as they choose which candidate to support.

Posted by Sponsa Christi at 10:35 AM No comments:

Feast of the Presentation 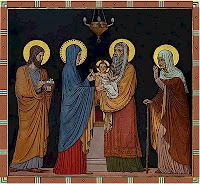 Today, forty days after Christmas, the Church celebrates the feast of Jesus' presentation in the Temple. February 2 is also the day the Church chooses to commemorate (non-liturgically) the gift of the consecrated life.

I have always assumed that this feast was selected as an appropriate occasion for the "World Day of Consecrated Life" because this was the day when Jesus was presented, i.e. "consecrated" to God in the Temple.

Of course, Jesus' life was the most "consecrated" of anyone who ever walked the earth, and all consecrated people strive to live as He did. (Although He was not presented in the Temple to be ritually set apart from other children. Rather, in presenting Him, His parents were fulfilling the Jewish law and custom described in Exodus 13:1-3a, 11-16.)

But as I reflect, it would seem that the lives of modern consecrated people also find a parallel in the figures of Simeon and Anna. Like Anna, who spent most of her time in the Temple, consecrated people spend their lives occupied with the things of God. And like Simeon, their life is completed only by seeing Christ.

This feast can serve to remind us that the pure in heart will see God. I hope and pray that a life spent eagerly waiting for His coming will serve as my own purifying "refiner's fire," so that I too may have this as my reward.
Posted by Sponsa Christi at 6:40 PM No comments: