Thoughts on the Year of Faith

As most readers of Catholic blogs probably already know by now, our Holy Father has declared October 11, 2012 – November 24, 2013 to be a “Year of Faith.” In the words of Pope Benedict XVI, the Year of Faith is to be “…a summons to an authentic and renewed conversion to the Lord, the one Savior of the world.”

That is, the Year of Faith is a call for the entire people of God to deepen their knowledge and love of the truths of our Catholic faith as reveled in the Church’s teachings.

Specifically, as Pope Benedict further states in his Apostolic Letter Porta Fedei, it is hoped that this Year of Faith will:

“…arouse in every believer the aspiration to profess the faith in fullness and with renewed conviction, with confidence and hope. It will also be a good opportunity to intensify the celebration of the faith in the liturgy, especially in the Eucharist, which is “the summit towards which the activity of the Church is directed; ... and also the source from which all its power flows.” At the same time, we make it our prayer that believers’ witness of life may grow in credibility. To rediscover the content of the faith that is professed, celebrated, lived and prayed, and to reflect on the act of faith, is a task that every believer must make his own, especially in the course of this Year.”


It certainly has been a blessing to be here in Rome for the opening of the Year of Faith, and to be able to pray for its fruitfulness from the heart of the Church. (In particular, it was especially moving to have been present at the opening Mass for the Year of Faith—classes were canceled at all the Pontifical Universities in Rome just so that the students would be able to attend.) And so, my experiences here have prompted me to reflect on the ways in which the Year of Faith could be especially significant to us as consecrated virgins.

First of all, in terms of spirituality, I think the Year of Faith can lead us to a deeper appreciation of the theological affinity between the concepts of faith and virginity. In once sense, virginity is the “evidence of things not seen,” (Hebrews 11:1) in that consecrated virgins profess their firm hope in the resurrection by their stated resolve to life a life of perpetual, perfect chastity.
The concept of virginity also has a profound resonance with “faith” as this word is used to refer to the objective truth of our beliefs about God. The Rite of Consecration itself, in its suggested homily, compares the virginity of consecrated virgins to the virginity of the Church in that both are called in a special way to “keep the faith whole and entire.” That is, just as consecrated virgins are called to live uncompromised in their moral integrity so as to offer Christ and undivided heart, so too are they called to maintain a doctrinal orthodoxy in their beliefs in order to help preserve the “wholeness” of the Church’s teaching, as it has existed unchanged since the time of the Apostles.
The Year of Faith is also significant for consecrated virgins in that it commemorates the fiftieth anniversary of the opening of the second Vatican Ecumenical Council, which restored the Rite of Consecration to a Life of Virginity and the ancient Order of Virgins to the life of the modern Church.
Finally, the Year of Faith is pertinent to us in its connection to the New Evangelization (as connected which was highlighted by the very recent Synod of Bishops on the same topic). Consecrated virginity is a vocation which is ordered towards a public witness of Christ’s love for His Church—a witness which has the potential to be especially striking in the modern western world, where the fire of the people’s faith has often grown dim despite a historically Christian culture.
Because of these things, I think it would be fitting for us to make a real, focused effort to take this Year of Faith to heart.
One concrete thing that I think we as consecrated virgins could appropriately do to observe this Year of Faith is to read (or re-read) the actual documents of Vatican II. These can all be found online, and in a number of languages, on the Vatican’s website. Many of these documents make excellent spiritual reading (a few are even included in the Office of Readings in the breviary), and a working knowledge of them is crucial for understanding the Church.
Another thing we could take on in observance of the Year of Faith is to set aside some time to meditate and reflect more deeply on the Creed. Although since we say it every Sunday it’s already very familiar to us, we can always strive to profess it ever more sincerely and enthusiastically, and to let it touch our minds and hearts more fruitfully. (On a personal note, in my house in Rome, we have decided to recite the Creed together every day before Vespers, offering it up for the intentions of the American bishops.)
But most importantly, calling to mind the deep connection between the timeless truths of our faith, the teachings of the second Vatican Council, and the New Evangelization, I think that it would be a beautiful thing if we dedicated this year to a prayerful discernment of how we consecrated virgins might better serve as witnesses to the Gospel. In other words, how might we live our lives in such a way as to help re-insight the fire of the Gospel in the hearts of those for whom it has grown cold?
We can ask Mary, Virgin of Virgins and Mother of the Church, to pray for us in this endeavor.
***
Post Script – a few resources:
Some great English-language resources for a fuller participation in the Year of Faith are the Vatican’s official Year of Faith website and the section on the Year of Faith at the website of the United States Conference of Catholic Bishops (USCCB).
All of the Vatican II documents can be found online, in a number of languages, on the Vatican’s general website. In reading the Vatican II documents, I think it might be most helpful to focus on the four “big ones” first (that is, the Dogmatic Constitutions). There are:
Sacrosanctum Concilium (On the Sacred Liturgy)
Lumen Gentium (On the Church)
Dei Verbum (On Divine Revelation)
Gaudium et Spes (On the Church in the Modern World)

Because it deals with consecrated life—albeit religious life and not consecrated virginity specifically—I think Perfectae Caritatis could also be of interest to consecrated virgins.
The Nicene Creed can be found in the new English translation here on the USCCB website (so now you don’t need to steal the pew card from your local parish!).
And for those who are interested in learning to chant the Creed in Latin, here’s a very helpful video:
Posted by Sponsa Christi at 4:44 PM No comments: 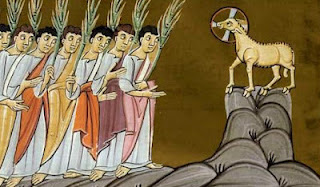 (from the first reading of the Mass for today):

I, John, saw another angel come up from the East,holding the seal of the living God.

He cried out in a loud voice to the four angels who were given power to damage the land and the sea,

“Do not damage the land or the sea or the trees until we put the seal on the foreheads of the servants of our God.”

I heard the number of those who had been marked with the seal, one hundred and forty-four thousand marked from every tribe of the children of Israel.After this I had a vision of a great multitude, which no one could count, from every nation, race, people, and tongue. They stood before the throne and before the Lamb, wearing white robes and holding palm branches in their hands.

They cried out in a loud voice:
“Salvation comes from our God, who is seated on the throne,
and from the Lamb.”

All the angels stood around the throne and around the elders and the four living creatures.
They prostrated themselves before the throne, worshiped God, and exclaimed:


“Amen. Blessing and glory,
wisdom and thanksgiving, honor, power, and might
be to our God forever and ever.
Amen.”

Then one of the elders spoke up and said to me,
“Who are these wearing white robes, and where did they come from?”
I said to him, “My lord, you are the one who knows.”

He said to me,

“These are the ones who have survived the time of great distress; they have washed their robes and made them white in the Blood of the Lamb.”

Posted by Sponsa Christi at 11:55 AM No comments: