For those of you who have not yet seen it, I recently wrote a guest post for the blog “Roman Catholic Vocations,” which is run by Brad Watkins, assistant Vocation Director for the Diocese of Raleigh, N.C. (which happens to be the home diocese of a seminarian who was one of my best friends in college, and then the Master of Ceremonies at my consecration Mass!). In the post I wrote (which you can read here) I give a basic overview of this vocation, with special emphasis on the Rite itself.

I think Mr. Watkins does a great job with the overall. In my opinion it’s one of the best on-line resources for people discerning priestly or consecrated vocations, and I wish it would have existed when I first started discerning. Naturally, I’m especially grateful that he takes the time to include information on consecrated virginity—it’s always nice when this vocation is made a little less obscure!
Posted by Sponsa Christi at 8:29 PM No comments:

“The Giver of Life Was Her Only Love…” 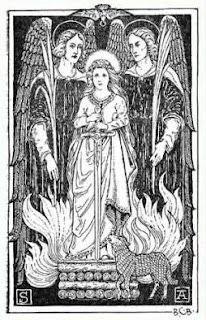 ...from the Office of Readings on the feast of St. Agnes:

There was little or no room in that small body for a wound. Though she could scarcely receive the blow, she could rise superior to it. Girls of her age cannot bear even their parents’ frowns and, pricked by a needle, weep as for a serious wound. Yet she shows no fear of the blood-stained hands of her executioners. She stands undaunted by heavy, clanking chains. She offers her whole body to be put to the sword by fierce soldiers. She is too young to know of death, yet is ready to face it. Dragged against her will to the altars, she stretches out her hands to the Lord in the midst of the flames, making the triumphant sign of Christ the victor on the altars of sacrilege. She puts her neck and hands in iron chains, but no chain can hold fast her tiny limbs.

A new kind of martyrdom! Too young to be punished, yet old enough for a martyr’s crown; unfitted for the contest, yet effortless in victory, she shows herself a master in valour despite the handicap of youth. As a bride she would not be hastening to join her husband with the same joy she shows as a virgin on her way to punishment, crowned not with flowers but with holiness of life, adorned not with braided hair but with Christ himself.

In the midst of tears, she sheds no tears herself. The crowds marvel at her recklessness in throwing away her life untasted, as if she had already lived life to the full. All are amazed that one not yet of legal age can give her testimony to God. So she succeeds in convincing others of her testimony about God, though her testimony in human affairs could not yet be accepted. What is beyond the power of nature, they argue, must come from its creator.

What menaces there were from the executioner, to frighten her; what promises made, to win her over; what influential people desired her in marriage! She answered: “To hope that any other will please me does wrong to my Spouse. I will be his who first chose me for himself. Executioner, why do you delay? If eyes that I do not want can desire this body, then let it perish.” She stood still, she prayed, she offered her neck.

You could see fear in the eyes of the executioner, as if he were the one condemned; his right hand trembled, his face grew pale as he saw the girl’s peril, while she had no fear for herself. One victim, but a twin martyrdom, to modesty and to religion; Agnes preserved her virginity, and gained a martyr’s crown.
Posted by Sponsa Christi at 4:46 PM No comments: 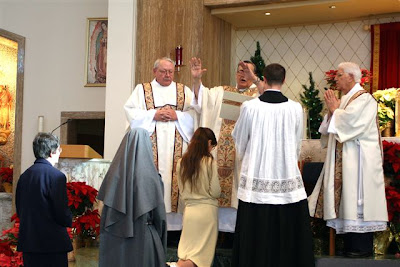 As requested, here is another consecration picture. This one was taken during the consecratory prayer itself.

I can honestly say that, a week and a half later, I have not yet “come down,” despite having been back at school for a few days! With the exception of my Baptism (which I don’t remember) I don’t think I have ever been happier about anything else in my life.

Special thanks to the Georgetown Visitation Monastery’s “blogging Sister” for her congratulations. (Their prayers are among the many that I’m sure helped make my consecration possible.)

And thank you also to everyone who prayed for me in the days leading up to my consecration--I have been very moved by everyone’s kindness.
Posted by Sponsa Christi at 9:48 PM 3 comments:

A Prayer from St. Clare of Assisi 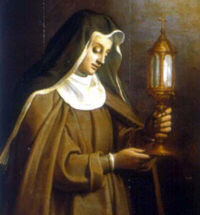 Here is a lovely prayer that one of my friends from school sent me the day after my consecration. It is attributed to St. Clare, although I don't think we know for sure that she herself wrote it.

Still, it captures my own feelings marvelously. Even though I don't think St. Clare was a consecrated virgin in the strict sense of the term (that is, having received the Rite of Consecration--obviously, she was a virgin who was consecrated by religious profession), I have always admired her for the totality with which she “fell in love” with Christ.

“My Lord, open the golden coffer, for within it I wish to place my heart. Tonight, I light this eternal flame over the world's censer. I want this flame to flicker forever in the wind, long after the stars fade and disappear.”

“My Lord, my one and only master, stretch your wings over the horizon of my world. I will walk barefoot with you until all the torches of the world are extinguished. For me there is only one voice, one face. Nothing will come between us, save the sword of fidelity.”

“I am young. I know very few things about life. They have spoken to me about autumns. There are no autumns in your spheres. I have heard that love is threatened by the poisons of tedium and routine. They even speak of desertion and indifference, things that are unimaginable to me. I know that the flag of faith will always flutter in your bell tower, and that you will carefully guard my gift in your golden coffer until the end of time.”

“My Lord Jesus Christ, place your seal on my words and graciously accept my consecration.”
Posted by Sponsa Christi at 9:10 PM No comments: 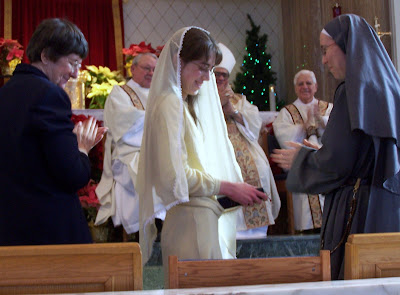 This picture was taken right after the Consecration rites, when I returned to my place in the sanctuary before the Liturgy of the Eucharist.
Posted by Sponsa Christi at 4:10 PM 13 comments: