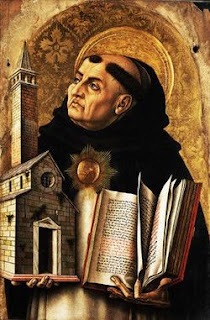 Today is the feast of St. Thomas Aquinas, who is sometimes referred to as "the most saintly of the learned and the most learned of the saints". He is the official patron saint of college students, and is often cited as the patron saint of philosophers.

Thus, he is a fairly significant saint for me in my life as an undergraduate Philosophy major. There are few saints who inspire me academically as well as spiritually, but St. Thomas is one of them!

St. Thomas was a remarkably prolific writer, and was one of the major architects of the philosophical movement known as Scholasticism. Scholasticism is somewhat out of favor in mainstream secular philosophical circles, but there remains a lively interest in this school of thought among Catholic scholars.
(This is a totally unqualified statement, but it's my thought that non-religious intellectuals who have a serious encounter with Scholasticism tend to become Catholic.) I personally have a great appreciation for the clarity and comprehensiveness of Thomistic thought.

Even though you might expect the studious St. Thomas Aquinas to have lead a rather dull life, I actually have a lot of fun swapping "St. Thomas" stories with my Catholic friends who are fellow Philosophy majors.

For example, St. Thomas' parents placed him in a Benedictine abbey as a child so that he could gain an education. The well-to-do Aquinas family expected him to remain in the monastery and become an abbot eventually, an appointment which would have brought great honor to the Aquinases. When St. Thomas decided to join the new mendicant order of St. Dominic, his family was furious. To change his mind, his brothers kidnapped him and locked him in a tower, where they exposed him to all sorts of sensual delights.

At one point, they sent a woman of questionable morality to visit him. St. Thomas--who was serious about chastity--grabbed a torch from the fireplace and chased her out of the room. Then he used the torch to trace a cross on the wall, and knelt down to pray. Of course, St. Thomas later found a way to escape from his prison.

I'll paraphrase my favorite story here. It's said that at the end of his life, St. Thomas had a vision. In it, Christ said to him, "You have written well of me Thomas. What do you want as your reward?" To which St. Thomas responded, "Only You!"
Posted by Sponsa Christi at 1:45 PM