A Great Picture From an Old Roman Pontifical 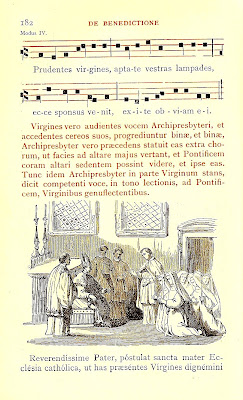 A couple of weeks ago, I was having fun looking through the stacks at the library of my new university, and I found an old copy of the Roman Pontifical, published in 1895. The entire book was written in Latin, including the publishing information. It contained Rites such as Ordination to the Presbyterate, Episcopal consecration, the dedication of a Church, and the blessing of an Abbot or Abbess.

I was pleasantly surprised to see that it also included the older version of the Rite of Consecration to A Life of Virginity (or as it was written here, “De Benedictione et Consecratione Virginum,” which more literally translates into “On the Blessing and Consecration of Virgins”).

Although the Rite had fallen into all but total disuse for several centuries, there was a movement in the late nineteenth-century to restore the usage of the Rite for cloistered, solemnly professed Benedictine nuns. My guess is that this particular edition of the Roman Pontifical reflects this trend.

Women who were not members of religious Orders would not be permitted to receive the Rite of Consecration until the Second Vatican Council, after the Council document Sacrosanctum Concilium called for a revision of the Rite. When this was done, the Rite was revised into two versions, one for nuns and one for women “living in the world.”

I find it quite meaningful to note that the both modes of living consecrated virginity have the same liturgical “ancestor”—noting also that consecrated virginity in the world is the ancestor to religious life itself. Even now, the dissimilarities between the two contemporary forms of the Rite are fairly minor; I think the biggest difference is that the Rite for nuns anticipates the solemn profession of religious vows to occur within the same ceremony, where conversely the Rite for women in the world containes more elements in which the candidate publicly states her intention to be consecrated.

From my point of view as a soon-to-be consecrated virgin in the world, this commonality re-enforces the understanding of consecrated virginity as an especially radical commitment to Christ, as well as highlighting the contemplative dimension of this vocation.

The image I share with you here depicts the “calling of the candidates.” This is an important part of the Rite because it is here that a consecrated virgin actually receives her vocation in the canonical, ecclesial sense—in fact, this IS the “vocation” itself (the word of course stemming from the Latin “vocare,” to call), in which Christ and the Church, through the person of the Bishop, call the candidate to consecration. There are parallel “callings” in other vocationally-oriented Rites, such as the Ordination rituals.

The chant written at the top of the page, “Prudentes virgines, aptate vestres lampades, ecce sponsa venit, exite obviam ei,” translates to: “Wise virgins, prepare your lamps, behold, the Bridegroom comes, go out to meet him.” Clearly an allusion to the Gospel story of the wise and foolish virgins, this antiphon, along with the carrying of candles illustrated here, was almost directly adopted in the revised Rite as one of the options for the “calling of the candidates.” You can see this for yourself in the Rite of Consecration, number 13.

Posted by Sponsa Christi at 3:35 PM