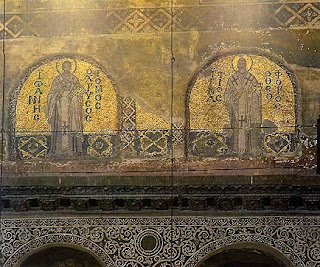 (about the photo: these is a mosaic from the Haggia Sophia depicting St. John Chrysostom on the left, with St. Ignatius of Antioch at right.)

As I mentioned in my last post, I have been working on a list of reasons to become a consecrated virgin in the world according to canon 604. (That is, elements which make canon 604 unique among other forms of consecrated life, as opposed to discussing the virtues of the consecrated life in general.) Yet I found that, as these thoughts are all very close to my heart, I had a lot to say about them. So I decided to discuss these things in a series of posts, of which this is the first.

But do keep in mind that my decision to embrace this particular vocation was based first and foremost on a simple, inexplicable sense of being called to consecrated virginity, and not any other form of consecrated life. Although I am listing aspects of canon 604 which attracted me, please don’t misconstrue this as a checklist of “discernment pros and cons.”

Today we celebrate the feast of St. Ignatius of Antioch, bishop and martyr. According to the breviary:

“St Ignatius was a successor of St. Peter as the bishop of Antioch. Condemned to death by being thrown to wild animals, he was brought to Rome forexecution and was martyred there under the Emperor Trajan in 107. On the journey to Rome he wrote seven letters to different Churches. In these he discussed Christ, the structure of the Church, and the Christian life in a manner at once wise and learned.”

Most of what we know about St. Ignatius comes from these letters.

Additionally, all of St. Ignatius’ precious letters are addressed to individual Churches. I think that this is particularly significant, as one of the most striking elements of consecrated virginity in the world is that it is one of the only consecrated vocations for women which entails an essential, explicit bond with the local Church.*

The local Church, or the diocese, is the fundamental organizational unit of the universal Church. Every individual diocese, comprising a specific geographical territory and headed by its own bishop, is like the Catholic Church in miniature. This structural system is clearly ancient, going back all the way to apostolic times. The local Churches in Corinth, Ephesus, Rome, et cetera, who received epistles from St. Paul; the “seven Churches” of which the book of Revelation speaks; and the Churches to whom St. Ignatius addresses his farewell letters are all effectively equivalent to our modern concept of “diocese.”

All lay people are more or less automatically a part of the diocese in which they live, coming under the pastoral authority of their local bishop. When a man becomes a diocesan priest, he makes a promise of obedience to his bishop, which is also an implicit commitment to spend his life serving the faithful in that bishop’s diocese.

But broadly speaking, individuals lose their association with their diocese when they enter religious life. Where the ecclesial “home” of a lay person is the Church of the area in which he or she lives (or for a diocesan priest, the local Church in which he is incardinated), a religious is at home in his or her Order or congregation, which is not typically thought of as being defined by geography. And while religious, like all Catholics, are bound to obey the bishop of the place where they are actually present, a religious is more directly under the authority of the superiors of his or her institute.

In some ways this dynamic is more pronounced in male, clerical religious institutes, since questions about Ordinations and incardination highlight the different roles of the local bishop and the religious superiors. Yet these issues still apply to women religious, as the only distinction the new Code of Canon Law makes between the two genders in religious life are certain additional laws and provisions regarding religious priests and clerical institutes.

But unlike a religious who necessarily “leaves” her local Church upon joining her community, the vocation of a consecrated virgin is directly connected to her diocese—most notably in that she is admitted to this consecrated by the diocesan bishop.

Although on the surface this may appear to some as canonical hair-splitting, the distinctions between “diocesan” and religious vocations for women are based on very real and meaningful (though perhaps not blatantly obvious) realities.

First, as an entity a diocese is every bit as noble and distinguished as a religious Order. Actually, the world’s many dioceses are even more fundamental to the structure of the Church than are the variety of religious institutes. While the consecrated life as a general category is essential to the Church, the Church could still exist (albeit not without losing untold blessings and benefits) without religious life per se. This is not to undermine the tremendous gifts to the Church which are religious institutes, but rather to point out that a call to priesthood or consecrated life outside of religious life is a valid and valuable vocation.

And while I do believe that a consecrated woman in the world should be have a lifestyle that is distinct as being consecrated (i.e., in many ways different from that of the average devout lay person), a woman consecrated according to canon 604 has the unique advantage of being able to pray for the people of whom she is a real part. I think of the line from the suggested homily in the Rite of Consecration, “They come from God’s holy people, from your own families. They are your daughters, your sisters, your relatives, joined by the ties of family or friendship.”

In a sense, consecrated virginity within a diocese makes the joy and love of an individual woman’s total gift of self especially “accessible” for all the people of her local Church.

Similarly, I would venture to say that belonging to a diocese can make the prayers of a consecrated virgin for the local clergy especially effective. Many of the famous male clerical religious Orders have a female branch of contemplative nuns who support their brothers’ apostolic activity through their lives of prayer and penance. This is the express purpose of the second-order Dominican nuns, but I this that this is also true for the Franciscans and the Poor Clares, for the Redemptorists and Redemptoristines, the Passionist fathers and nuns, and the brothers and contemplative sisters of the Congregation of St. John.

I believe that consecrated virgins could fulfill a similar role for the clergy of their diocese.

* The other forms of “diocesan” consecrated life being can. 603 eremitic life, and possibly life in a religious congregation of diocesan rite—although diocesan congregations often seek and obtain pontifical status.
Posted by Sponsa Christi at 9:43 PM