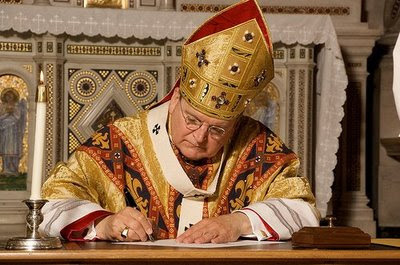 This quote was sent to me by Judith Stegman, president of the Unites Sates Association of Consecrated Virgins (USACV).

The passage here was taken from an interview with Archbishop Burke in Washington D.C., shortly after he spoke at the National Catholic Prayer Breakfast earlier this month.
Although Archbishop Burke is currently stationed at the Vatican as head of the Roman Rota (the Church’s “Supreme Court”), until recently he served as the liaison between the USACV and the bishops’ conference in the United States. (Emphases, in bold, are mine.)
***
From National Review Online:

En route from Washington to the Eternal City, Archbishop Burke took some questions from National Review Online, expanding on some of the themes of his speech Friday, and addressing a new one or two.

KATHRYN JEAN LOPEZ: You’ve been very supportive of “consecrated virgins.” Is this concept important in the church? Does American society — one you say is in “crisis” — need it?

ARCHBISHOP BURKE: The consecrated virgins give a strong witness to the purity and selflessness with which we all should love one another, especially our brothers and sisters who are in most need. The consecrated virgin offers her virginity to Christ for consecration, so that she may give public witness to the love of Christ for all, without boundary and to the end. A society which is growing increasingly secularized needs desperately the life and witness of consecrated virgins who call all their brothers and sisters to love as Christ loves, that is, for the lasting good of all.
Posted by Sponsa Christi at 12:32 PM

I know that this is a terrible question, but with the world that we live in today, what occurs if a consecrated virgin becomes a victim of sexual assault?

Because the Church teaches that virginity is primarily a matter of one’s will, women who are victims of sexual assault may still become consecrated virgins if they have never had consensual sexual relations with anyone. Likewise, if—God forbid—a consecrated virgin were to become a rape victim, this would not change her vocation or her status in the Church.

And on a related note, in the pre-Vatican II version of the “Rite of Consecration to a Life of Virginity,” at the end of the consecration Mass the bishop actually pronounced a solemn malediction (curse) upon anyone who would dare touch a consecrated virgin with evil intent.