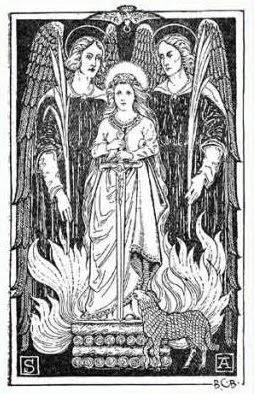 Today is the feast of St. Agnes, who in many ways could be considered the patroness of consecrated virgins. St. Agnes is one of the most significant of the Church’s early virgin-martyr saints,* and many of the antiphons from her proper Office in the Liturgy of the Hours were incorporated into the Rite of Consecration to a Life of Virginity. (Including the famous and beautiful antiphon: “I am espoused to Him whom the angels serve; sun and moon stand in wonder at His glory.” Originally a quote from St. Agnes herself at the time of her martyrdom, this is sung or recited by a newly consecrated virgin as a response to having received the ring from the bishop.)

Additionally, on the feast of St. Agnes, two lambs are brought to St. Peter’s basilica to be blessed by the Pope. On Holy Thursday, their wool is shorn, later to be spun into the pallia worn by metropolitan Archbishops. Although I haven’t seen the Church officially elaborate on signification of this particular nuance, in my mind this seems very symbolic of the way in which the prayers and self-offering of consecrated virgins (and consecrated women in general) support those charged with the episcopate’s mission of teaching, governing, and sanctifying.

Nor is it simply because, as St. Ambrose said, “…virginity is not praiseworthy because it is found in martyrs, but because itself makes martyrs.” Although certainly this is true— renouncing marriage and family life out of love for Christ could help prepare one for renouncing even one’s very life for His sake.

Likewise, consecrated virgins are called to be a living embodiment of the love that gave the martyrs the strength to stand firm in their time of trial. With her whole life, given over in sacrifice yet still here on earth, a consecrated virgin is to exemplify the passage in the Song of Songs**:

“…stern as death is love,
relentless as the nether world is devotion;
its flames are a blazing fire.

Deep waters cannot quench love,
nor floods sweep it away.
Were one to offer all he owns to purchase love,
he would be roundly mocked.”

Is this an unreasonably high goal? By human standards, yes! But it is also the specific vocation to which all consecrated virgins are called. So while I usually find myself praying for “Sponsa Christi” readers, today I ask all readers to keep the Order of Virgins especially in your prayers.

Thank you for this important reflection about St. Agnes.
Last night I watched on EWTN, the March for Life Vigil Mass at Immaculate Conception in Washington, DC. The homily was given by Cardinal Di Nardo. He was wonderful - he spoke much about Agnes. He mentiones that her name is Greek, not meaning "lamb", but "The Pure One."

I think I noticed some Consecrated Virgins in the audience (wearing white veils).

Hi J! Thinking of you on for your wonderful feast of St Agnes. I didn't know about the link between the lambs and the pallia - one to tuck away in my memory.

The Order of Virgins is always in my prayers. How's your study getting on?