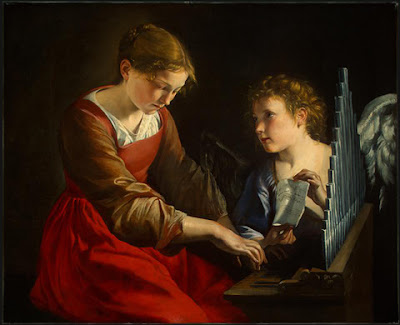 Today is the feast of St. Cecilia, an early consecrated virgin and martyr, whose name is one of the many included in the Roman Canon (a.ka. Eucharistic Prayer I). Her memorial is the first of a series of consecrated virgin saints’ feast days which will continue throughout the winter months.

Although St. Cecilia was a consecrated virgin “living in the world”—which makes her one of my spiritual “sisters”—she is also the patroness of the Nashville Dominicans, as well as (I believe) a patroness for second Order cloistered Dominican nuns.

And so, shamelessly “borrowing” from the Nashville Dominicans’ vocation website, here is a brief but lovely biography of today’s saint:
***
Cecilia’s story is well guarded by long-standing tradition, which presents to us a young Christian girl with an undying faith in an era when faith was an unpopular and dangerous virtue. Born to pagan parents, and perhaps converted through the instrumentality of a Christian nurse, Cecilia was raised in a noble Roman home during a time of persecution.

We are told that, according to custom, Cecilia’s parents arranged for her to marry a young patrician named Valerian. Cecilia, however, had already vowed her virginity to God, desiring to root herself even more deeply in her Baptismal consecration. On her wedding night, she resolutely explained her vow to Valerian, whose initial anger and confusion were transformed into conversion under the influence of his wife’s strong faith and the instruction of the Christian bishop. Valerian and Cecilia subsequently helped to convert Valerian’s brother Tiburtius, and the three became known for their works of charity and their lives of Christian virtue.

Though arrested and threatened with execution because of their practice of Christianity, Valerian and Tiburtius refused to deny their faith. They were cruelly martyred, but not before they had succeeded in converting their executioner, who had been profoundly affected by the steadfast example of the other young men. Cecilia’s arrest soon followed. Despite the fact that the Roman prefect attempted to persuade her toward more “politically correct” behavior, Cecilia refused to submit. After a failed attempt to suffocate her in a heated bath in her own home, an executioner was sent to behead her.

Three blows mortally wounded Cecilia, yet failed to kill her immediately, and she survived for three days. We are told that, even in her dying condition, she continued to offer the witness of a vibrant faith, hope and charity that would not die. Cecilia bequeathed her possessions to the poor and her home to the Church, to be used as a house of worship.

In 821 A.D. Pope Paschal I had Cecilia’s body removed from its burial place in the Catacomb of St. Callistus—where it was found incorrupt—and reinterred under the altar in the Basilica of St. Cecilia. Almost seven centuries later, in 1599, the titular bishop of the basilica, wishing to enlarge and decorate the structure, excavated beneath the altar and opened Cecilia’s coffin as well as her husband’s. All present were deeply moved when they saw Cecilia’s body, still perfectly incorrupt, lying on her right side as naturally as if she were asleep. The sculptor Stefano Maderno was commissioned to carve the saint in this position of her martyrdom.

To His glory, He who is glorified in His saints would not allow “His beloved to know decay” (Psalm 16)—a sign to all virgins consecrated to Christ, of their Spouse’s enduring love. ... Cecilia’s music is the eternal heavenly call, which sounds in the soul despite the noise and pressures of the world, inspiring the bride to an unshakeable vow of love even unto death.
Posted by Sponsa Christi at 12:43 PM

St. Cecilia has never been a patroness for the Nuns...we do not have separate patroness from the friars.
Nor is there any historical evidence that the first nuns gathered on the feast of St. Cecilia. The traditional date has always been Dec 27, feast of St. John the beloved.

Lovely! Thanks for sharing. St. Cecilia, pray for us!

Oops! Sorry—I must have been confusing St. Cecilia, the ancient Roman virgin-martyr, with Bl. Cecilia, the early nun who told us what St. Dominic looked like.

Naturally, I’m not going to argue with you—of all bloggers!—about Dominican history and spirituality, but I thought I heard somewhere that whenever St. Dominic had a vision of Our Lady, St. Cecilia and some other saint were always at Our Lady’s side? Or maybe I’m just remembering something wrong.

Anyway, this is a bit of a relief, because I was beginning to be just slightly jealous of the Dominican Order for “taking over” so many of the best female saints (e.g., St. Mary Magdalene and St. Catherine of Alexandria)! At least, except for the one Nashville congregation, St. Cecilia is apparently “all ours” for consecrated virgins! ;-)

Yes, St. Cecilia always appeared with St. Catharine of Alexandria (my patroness!) and Our Lady. The Nashville Sisters DO have on their website that St. Cecilia is a patroness of the ORDER but I don't know where they got that. Obviously, she is patroness of their congregation.

Hey, you still get St. Agnes, St. Agatha, and tons of other saints!