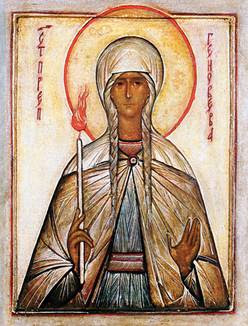 Today is not only my second anniversary (Deo gratias!) but also my name day. Today is the feast of St. Genevieve, who is my patron saint. My real first name is “Jenna,” which my mother chose as a shortened, Americanized version of my grandmother’s name, Genevieve.

For some reason, St. Genevieve isn’t a very popular saint in the United States (although many of European Sisters of St. John whom I know have a special love for her). But she’s a wonderful saint for young women in general, and for consecrated virgins “living in the world” especially.

Here is a brief summary of her life, which I adapted slightly from the Catholic Encyclopedia entry on NewAdvent.org. Emphases in bold, and comments in red, are mine.

***
Patroness of Paris, b. at Nanterre, c. 419 or 422; d. at Paris, 512. Her feast is kept on January 3. She was the daughter of Severus and Gerontia; popular tradition represents her parents as poor peasants, though it seems more likely that they were wealthy and respectable townspeople.

In 429 St. Germain of Auxerre and St. Lupus of Troyes were sent across from Gaul to Britain to combat Pelagianism. On their way they stopped at Nanterre, a small village about eight miles from Paris. The inhabitants flocked out to welcome them, and St. Germain preached to the assembled multitude.

It chanced that the pious demeanor and thoughtfulness of a young girl among his hearers attracted his attention. After the sermon he caused the child to be brought to him, spoke to her with interest, and encouraged her to persevere in the path of virtue. (St. Germain seems to have been encouraging of young vocations!) Learning that she was anxious to devote herself to the service of God, he interviewed her parents, and foretold them that their child would lead a life of sanctity and by her example and instruction bring many virgins to consecrate themselves to God. Before parting next morning he saw her again, and on her renewing her consecration (this must have been something like a simple pledge or promise) he blessed her and gave her a medal engraved with a cross, telling her to keep it in remembrance of her dedication to Christ. He exhorted her likewise to be content with the medal, and wear it instead of her pearls and golden ornaments.

There seem to have been no convents near her village (actually, St. Genevieve lived just before the advent of western religious life properly so-called—she died about thirty years before the Rule of St. Benedict was written); and Genevieve, like so many others who wished to practice religious virtue, remained at home, leading an innocent, prayerful life. (She was an excellent example of a consecrated virgin “living in the world.” I find it wonderfully providential that my patroness had a vocation to the exact same form of consecrated life to which I was also called.) It is uncertain when she formally received the religious veil (St. Genevieve didn’t just “receive the veil”—from all appearances, it seems that she was consecrated according to an ancient version of the Rite of Consecration to a Life of Virginity). Some writers assert that it was on the occasion of St. Gregory’s return from his mission to Britain; others say she received it about her sixteenth year, along with two companions, from the hands of the Bishop of Paris.

On the death of her parents she went to Paris, and lived with her godmother. She devoted herself to works of charity and practiced severe corporal austerities, abstaining completely from flesh meat and breaking her fast only twice in the week. These mortifications she continued for over thirty years, until her ecclesiastical superiors thought it their duty to make her diminish her austerities. Many of her neighbors, filled with jealousy and envy, accused Genevieve of being an impostor and a hypocrite. Like St. Joan of Arc in later times, she had frequent communion with the other world, but her visions and prophecies were treated as frauds and deceits. Her enemies conspired to drown her; but, through the intervention of St. Germain of Auxerre, their animosity was finally overcome.

The bishop of the city appointed her to look after the welfare of the virgins dedicated to God, and by her instruction and example she led them to a high degree of sanctity. (Because of this point, I think it would be good if we consecrated virgins regularly sought St. Genevieve’s prayerful intercession as we strive to develop solid formation programs for modern aspiring consecrated virgins.)

In 451 Attila and his Huns were sweeping over Gaul; and the inhabitants of Paris prepared to flee. Genevieve encouraged them to hope and trust in God; she urged them to do works of penance, and added that if they did so the town would be spared. Her exhortations prevailed; the citizens recovered their calm, and Attila’s hordes turned off towards Orléans, leaving Paris untouched. (As a consecrated virgin from New York, I try to imitate St. Genevieve in praying for the temporal and spiritual safety of my own metropolitan area.) Some years later Merowig (Mérovée) took Paris; during the siege Genevieve distinguished herself by her charity and self- sacrifice. Through her influence Merowig and his successors, Childeric and Clovis, displayed unwonted clemency towards the citizens.

It was she, too, who first formed the plan of erecting a church in Paris in honor of Saints Peter and Paul. It was begun by Clovis at Mont-lès-Paris, shortly before his death in 511. Genevieve died the following year, and when the church was completed her body was interred within it. This fact, and the numerous miracles wrought at her tomb, caused the name of Sainte-Geneviève to be given to it. St. Genevieve’s relics were preserved in her church until the time of the French Revolution.

Through the centuries, Paris received striking proof of the efficacy of her intercession. Prayerful devotion to St. Genevieve saved the city from complete inundation in 834. And in 1129 a violent plague, known as the mal des ardents, carried off over 14,000 victims, but it ceased suddenly during a procession in her honor.
Posted by Sponsa Christi at 9:04 PM

"The bishop of the city appointed her to look after the welfare of the virgins dedicated to God, and by her instruction and example she led them to a high degree of sanctity."

This strikes me as being very "you".

I follow your blog because I study the church so I can better defend her and I am very much in love with Jesus and His church. I have spent time in youth ministry and teens still ask me for advice. I am a man of deep prayer and your posts help my prayer life. I see you as a sister that is doing it God's way and brings me joy. I have a blog of my own and your post influence it. I have many more reasons, but you get the point.
Paul