Updates from My Life in Rome 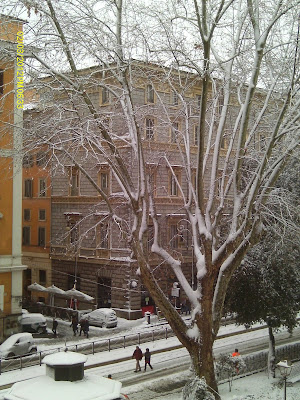 (Photo: a view from my bedroom window during a February snowstorm here in Rome. )
I have not had much of a chance to blog lately, though I do miss it and hope to be able to write a real post soon. Here is some of what I have been up to in the past month or so:

First, I took my final exams for the first semester, and I actually did reasonably well, considering that all the lectures and most of the readings were in a language that I never studied before. (And for those of you who were wondering…the written exams were in Italian, but for the first year only, we’re allowed to write our answers in any major European language that our professor understands.)

It’s a huge relief to have a whole semester under my belt, and to know that I am capable of passing exams here. So I’m happy to be able to joke with the dean of my school that he doesn’t have to buy a plane ticket to send me back to New York!

Many thanks to everyone who has been praying for my academic success—though I ask that you please keep it up!

From February 15-20, I was able to join in with the pilgrimage group from the Archdiocese of New York that was organized for the consistory where Archbishop Dolan was named a Cardinal. I had the chance to attended most of the events with the pilgrims attending most of the events. What a beautiful experience! Even though I basically live here in Rome, I felt like I was also on pilgrimage.

Aside from the consistory itself and the Papal Mass the next day, the highlights of the pilgrimage were Masses celebrated by the Cardinal-archbishop at the high altars of the four major basilicas in Rome: the first day was at St. John Lateran, the next day was St. Mary Major, the Friday before the consistory was at the altar of the chair at St. Peter’s, and the Monday after was at St. Paul Outside the Walls.

Each of these basilicas has major historical and theological significance, and each has some important relic buried beneath their high altars. For example, St. Mary Major is generally considered to be the oldest Church dedicated to Our Lady, and its high altar is built over a relic of the manger where the infant Christ was placed. St. John Lateran is the Pope’s actual cathedral Church, and St. Peter’s and St. Paul Outside the Walls are built over the tombs of St. Peter and St. Paul, respectively. St. Paul Outside the Walls also has the relics of St. Timothy, a fact that our new Cardinal certainly didn’t hesitate to point out!

It was an AMAZING gift to be able to be able to participate in the Holy Sacrifice of the Mass in small (or at least small-ish) groups gathered around such privileged altars, with my own Archbishop, dozens of New York priests, my “diocesan brother” seminarians also studying here in Rome, and large numbers of fellow Catholic New Yorkers.

Part of the gift was having a chance to taste—however briefly—a fuller sense of being spiritually “at home” than I’ve ever had anywhere else. I was “home” with my particular local Church in the company of a good portion of the Archdiocese of New York, while at the same time my physical presence in Rome reminded me in an especially vivid and concrete way of my “home” in the universal Church.

Among other things, this helped remind me of the reason why I’m doing everything I do here, and why I strive and struggle to live as much of a truly consecrated life as I can. As wonderful as Rome is, living and studying here can still seem frustrating and overwhelming at times—with the culture shock, language barriers, and challenging coursework, visible “results” come slowly, sometimes it’s tempting to feel like you’re not getting anywhere despite your best efforts. (Similarly, three years after my solemn consecration as a virgin, I have to say that often the best way to describe my consecrated life in general is as a mystery of trust and unseen grace. )

And so it was a real consolation to be with people from the archdiocese where I will one day be serving—or rather, serve even here and now, if you count my prayers and sacrifices. It helps me to keep in mind that my life is offered for real people, in the visible institution of the Church which Christ Himself founded.

Speaking for myself personally, I’m always so grateful for times like this, when God reminds me that my vocation isn’t just some sort of abstract theory, poetic phrasing, or nebulous “spirituality” independent of my every-day life, but is rather a concrete reality with real—even if not always readily apparent—consequences for myself and for the wider Church.

(A photo of me greeting our new Cardinal at the closing dinner of the consistory pilgrimage.)
***
On a much lighter note, I (along with all the Sisters in the house where I live here) did enjoy the remarkable snowfalls that we had in Rome in the beginning of February. We were told that it was the first significant snowfall that Rome had had in twenty-six years.

We had so much snow (about eight inches on the ground at one point), that I was joking that it almost seemed like I was in Rome, New York. Although as a New Yorker, I was alternately amused and disconcerted at the Romans’ apparent inability to deal with snow…e.g., I was wondering why the sidewalk on Corso Vittorio Emanuele was so slick, until one of the NAC seminarians told me that some people were trying to clear away the snow on walkways by pouring water on it. Not exactly the best idea in below-freezing temperatures!

Anyway, it was beautiful while it lasted! Here is another view of the snowfall taken from my bedroom window: 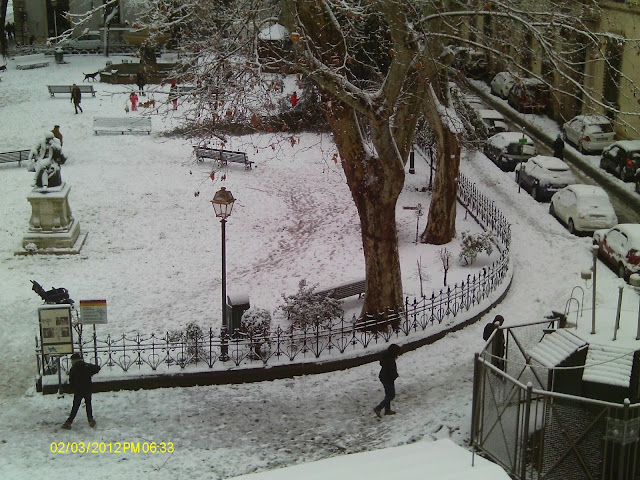 Posted by Sponsa Christi at 9:24 AM

Glad to hear that your exams went well and that you are adapting to life in Rome. We were supposed to get together, but I'm stuck in the States 'till September, so I guess we'll have to take a rain check. Hope things start to warm up soon!
God bless!
Jessica