Quick Question: Are consecrated virgins called to pray for priests? 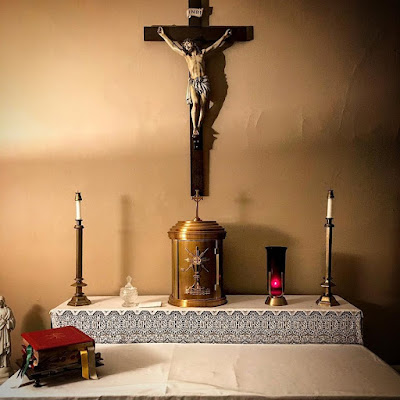 Longer answer: Prayer for priests per se isn’t necessarily the central aspect of our vocation, although consecrated virgins would certainly seem to be called to pray for the local clergy of their dioceses in at least a general way.

The praenotanda of the Rite of Consecration to a Life of Virginity lists prayer as one of the “principle duties of those consecrated.”* It is worth noting that in the original Latin typical edition, the word for “duties” is actually “munera,” a word that is often translated in other context as “offices.” In many ways, an office represents a more profound obligation that a mere duty. Whereas a “duty” might refer to a simple task, an “office” is more intrinsically linked to the concept of vocation and thus ultimately to a person’s very being. Identifying consecrated virgins as having an “office” of prayer underscores how essential prayer is to our vocation.

Yet at the same time it can be noted that a call to be especially dedicated to prayer, even to intercessory prayer, is different from a specific call to intercede for a specific intention. Some religious Orders, such as the Discalced Carmelites and the Handmaids of the Precious Blood, do have “prayer for priests” as a characteristic and central element of their founding charism. The Ordo virginum, in contrast, historically lacks this same heavy direct emphasis on intercessory prayer for the clergy.

Likewise, in the suggested homily supplied in the Rite of Consecration to a Life of Virginity, the bishop exhorts the soon-to-be-consecrated virgin to:

“Make it your concern to pray fervently for the spread of the Christian faith and for the unity of all Christians.  Pray earnestly to God for the welfare of the married. Remember also those who have forgotten their Father’s goodness and have abandoned his love, so that God’s mercy may forgive where his justice must condemn.”

However, these above-mentioned points are more about the simple absence of a directive for consecrated virgins to pray specifically for priests. And although points of silence in the law can be interesting and even meaningful, it is often difficult to draw firm conclusions based on silences alone.

Therefore, it is important to consider the more detailed and explicit discussion on consecrated virgins’ obligation of intercessory prayer found in the 2018 Instruction Ecclesiae Sponsae Imago (ESI). Among other places, ESI 43—a section which discusses some of the spiritual aspects of a consecrated virgin’s bond with her diocese—directs consecrated virgins to “…bring to prayer the needs of the Diocese and, in particular, the intentions of the Bishop.”

If a consecrated virgin is asked to intercede specifically for the needs of her diocese and the intentions of the bishop, it would be hard to imagine any sense in which this could possibly not encompass prayer for the local diocesan clergy. I.e., what diocesan bishop wouldn’t have the welfare of his priests as a principle personal prayer intention? And how could the spiritual support of priests not be a real need of the diocese?

In light of these considerations, I believe it is reasonable to conclude that consecrated virgins are indeed called to pray for priests—or at the very least, for the priests of their respective dioceses.

But since prayer for priests is referenced only implicitly here, I think it is reasonable to conclude that “prayer for priests” as such is not a distinctive characteristic element of the charism of the Ordo virginum (even while we should still keep in mind that the spiritual support of our local diocesan Church is). At the same time, consecrated virgins’ call to intercede for the local clergy is still implied rather strongly, so I think it would also be incorrect to regard “prayer for priests” as something somehow alien to our vocation.

(Photo by Fr. Bryan Jerabek, who was my classmate in my canon law program, and whom I reasonably presume doesn't mind me using it here!)

Posted by Sponsa Christi at 9:52 PM