A Practical Explanation of Consecrated Virginity 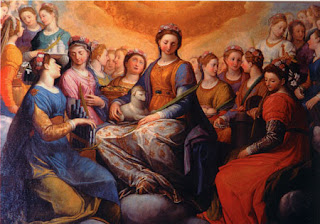 (About the image: this is a representation of St. Agnes in Heaven with other consecrated-virgin saints of the early Church.)

Here is a question I recently received in my comment box:

I stumbled upon your blog by means of another (isn't that always the way!) and I read many of your postings, but I am still stumped—what exactly is a consecrated virgin and what role do they play in the church? I have to admit here that I am a former Catholic but having spent the first twenty-four years of my life attending church and attending Catholic schools, I have never run across this term. Thanks! –Elizabethanne

Elizabethanne, your timing is perfect! (Or is it providential?) After receiving definite approval for my vocation this spring, I recently set a date for my consecration. So I am just now beginning to be open with the people in my life about what I am doing. And more often then not, this announcement requires quite a bit of explanation. I have been working on writing a brief description of consecrated virginity in the world which I could possibly make into a hand-out to give to people who had questions. This post represents some of my first attempts!

You are not alone in being “stumped”—I’ve found that my vocation is something unfamiliar even most practicing Catholics (including the daily Mass crowd). My mother has been telling friends and family that I am becoming a “freelance nun.” Canonically, this is inaccurate in more ways than I can count. But this explanation does work surprisingly well at conveying, in an on-the-spot kind of way, the basic idea of the sort of life which I will be embracing.

I find that one of the best ways to begin explaining consecrated virginity in the world is by describing the history of this vocation. The consecrated life is as old as the Church herself, but religious life as we know it did not exist until about the fourth century A.D. Thus, a woman could dedicate her life to Christ as a consecrated virgin before it was historically possible for her to become a nun. Very early in the Church’s history, a liturgical rite was developed for the conferral of solemn consecration upon women who had resolved to remain virgins “for the sake of the Kingdom of Heaven.”

Although there was a window of a few centuries during which a woman could either enter a monastery and become a nun OR become a consecrated virgin while remaining “in the world,” the rise of monasticism and the surrounding historical circumstances gradually put an end to the practice of consecrating uncloistered women. However, some religious orders continued to use the rite in conjunction with a nun’s solemn profession of vows, so the rite was not lost (as it easily could have been).

About a thousand years later, the second Vatican council called for a revision of the Rite of Consecration to a Life of Virginity, which re-established consecrated virginity in the world as recognized form of consecrated life.* When the Code of Canon Law was revised in 1983, it included a canon describing this vocation.

Modern consecrated virgins are solemnly consecrated by the local diocesan bishop (or by a delegated auxiliary bishop in some situations) within the context of the revised rite. The bishop is the one who grants permission for aspirants to receive this consecration, as well as the one who determines the circumstances under which they are to live their vocation.** Consecrated virgins remain directly under his authority, unlike religious sisters who are ordinarily accountable to the superiors of their religious congregation.

Besides life-long celibacy, the only formal obligation of a consecrated virgin is to pray for the needs of her diocese, and in particular for the good of her bishop and the diocesan clergy. Right now, there is very little official Church legislation pertaining to the concrete details of a consecrated virgin’s daily life. Still, I may be typical in that I pray the full Divine Office (Office of Readings, Morning Prayer, one of the daytime hours, Evening Prayer, and Night Prayer), attend daily Mass, make time for silent prayer, frequent the Sacrament of Reconciliation, and make a point to fast and do penance.

While consecrated virgins are expected to live simply, they do not take vows of poverty and must support themselves financially. Because of this, they are not obligated to take on any specific ministry. However, in my case I did chose to pursue an academic career specifically because I thought it would afford me a chance to help build up the Church in a more direct manner—my personal feeling was that I would need a spiritually-oriented exterior occupation to nourish my primary mode of service, which is prayer.

Once again, I hope this is helpful. If any of my readers would like me to elaborate on anything or to clarify some point, just ask!

*see the Vatican II document Sacrosanctum Concilium (Constitution on the Sacred Liturgy), art. 80.
** This is described in the introductory remarks in the Rite of Consecration.
Posted by Sponsa Christi at 9:05 PM

hELLO,
What you have written here doesn't sound all that differant than a diocesan heermit? How does it differ?
Thanks

This isn't entirely related to the topic of this post, but where did you find that beautiful picture of St. Agnes? :)