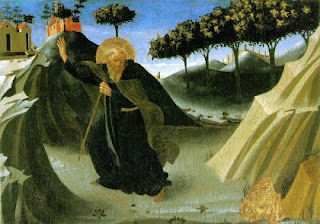 (About the image: this is St. Anthony of Egypt, the "Father of Monks" and one of the Church's earliest hermit-saints.)

No, despite my title, this is not a contest! It’s a response to one of my readers, who upon reading a recent post asks:

What you have written here doesn't sound all that different than a diocesan hermit. How does it differ? Thanks.

The short answer to this question is that consecrated virgins aren’t hermits!

But before I move on to the longer and arguably more helpful answer, I would like to acknowledge that the vocations of consecrated virginity in the world and diocesan eremitical life do have many things in common. Most notably, they are both ancient forms of consecrated life which were subsumed by the development of religious orders, but re-established in their own right as a consequence of the second Vatican Council.

Both vocations were formally recognized as belonging to the consecrated state when the Code of Canon Law was revised in 1983. Diocesan eremitic life is described in canon 603* and consecrated virginity in canon 604, so I suppose you could say that they’re even “neighbors.”

The relationship of diocesan hermits to their bishop is similar to that of consecrated virgins (i.e., the bishop is their “superior”). Thus, both vocations entail a spiritual bond with the local Church (as opposed to a religious order), and the primary obligation of both consecrated virgins and diocesan hermits is to pray for the needs of their diocese.

Still, consecrated virginity in the world and the diocesan eremitical life are two separate forms of consecration. Probably the most obvious difference is that a constitutive element of a hermit’s vocation is a special dedication to solitude and seclusion, something which does not ordinarily apply to consecrated virgins.

On a practical level, canon 604 is an option open only to women who are virgins (virginity being defined as the state of “never having been married or lived in open or flagrant violation of chastity”—see the introduction to the Rite of Consecration), where a single person of either gender could become a diocesan hermit, regardless of whether they had been widowed, or were always unmarried, or even are sincerely repentant after a sinful youth.

Historically, the eremitical life developed a few centuries after the Church’s foundation (and hence, after the existence of consecrated virginity), perhaps somewhat paradoxically as a reaction to the lack of opportunities for physical martyrdom. In times and places where being a Christian no longer incurred the possibility of a death sentence, some local Churches grew more relaxed in their attitudes towards the moral and spiritual life of the faithful. Leaving all one owned to live alone in the desert represented an attempt to walk a “narrower” path, and it also served as a new way to offer a radical declaration of one’s love for Christ.

Additionally, the solitude and silence of the desert helped foster the hermit’s own spiritual life by protecting him or her from worldly temptations and distractions, as well as by providing the needed “space” for constant conversation with God.

In my opinion, this “flight from the world” represents a turning point in the history of the spirituality of consecrated life. The eremitic life is the immediate precursor to religious life, which also has an emphasis on separating oneself from worldly society.* I think that this historical circumstance is the primary differentiation between the spirituality of modern consecrated virgins and diocesan hermits.

As I see it, part of the vocation to consecrated virginity in the world is a call to be a visible reminder of Christ’s love for His Church for the faithful in one’s home diocese. Although there is an element of detachment from the world in the life of a consecrated virgin, she prays for the local people from within their midst. A consecrated virgin is further able to serve as a manifestation of the love of God by means of exterior works of charity.

In contrast, a diocesan hermit bears witness to the primacy of Christ by literally leaving behind everything that is not God. Prayer is a hermit’s only apostolate generally speaking, although apparently some of the early hermits engaged in a ministry of spiritual direction. While in one sense a hermit may be invisible to the rest of the world, they retain a deep (if hidden) spiritual bond with the people for whom they pray.

If you would like to learn more about the life of a diocesan hermit, you might want to find out if there are any hermits living in your diocese. There is a fairly well-known community of hermits in the diocese of Paterson, NJ (you can read an article about them here).

Also, a diocesan hermit in California writes the blog “Notes from Stillsong Hermitage.” This would seem to be a good resource for anyone considering this vocation, although I don’t totally agree with all aspects of the author’s interpretation of canon 603. (E.g., I don’t think a diocesan hermit should generally adopt the spirituality of any particular religious order—in my opinion, this somewhat defeats the purpose of being “diocesan.”)

Finally, anyone interested in the eremitic life should read some of the writings of the Church Fathers. St. Athanasius’ Life of Anthony is a great place to start, and the writings of John Cassian are also helpful.

* Canon 603 reads: “In addition to institutes of consecrated life, the Church recognizes the eremitic or anchoritic life by which the Christian faithful devote their life to the praise of God and the salvation of the world through a stricter withdrawal from the world, the silence of solitude, and assiduous prayer and penance. ~2. A hermit is recognized by law as one dedicated to God in consecrated life if he or she publicly professes in the hands of the diocesan bishop the three evangelical councils, confirmed by vow or other sacred bond, and observes a proper program of living under his direction.”

** St. Benedict was a hermit before he wrote his Rule on the organization of the cloistered contemplative life lived in common.

Posted by Sponsa Christi at 2:45 PM

I enjoy reading your blog. Thank you for writing about this vocation.

May I point out that while the Introduction to the Rite does speak of virgins not having been married or living in open violation of chastity, it is not the definition of virginity? It is legalese to help the Bishop in the external forum determine that there is no evidence of the loss of virginity. Physical virginity is a requirement for the consecration except when involuntarily lost through natural causes or rape or incest.

You are absolutely correct in highlighting this point.

I chose to use the legalese in this post because I was trying to explain the different pre-requisites for can. 603 and can. 604—a matter which can be most easily discussed in legal terms.

I am grateful for your feedback, and I’m glad you enjoy my blog. (By the way, I found your blog from your comment, and I think it’s great!)