Closing of the Year of St. Paul

Today, the feast of Sts. Peter and Paul, marks the closing of “The Year of St. Paul.” And I have to say that this was a wonderful year in which to be consecrated! Over the course of the last year, and in light of my consecration, many of St. Paul’s words took on a new and more vivid meaning for me.
I felt that I could say with St. Paul, in my happiness…:
“For I am convinced that neither death, nor life, nor angels, nor principalities, nor present things, nor future things, nor powers, nor height, nor depth, nor any other creature will be able to separate us from the love of God in Christ Jesus our Lord.” (Romans 8:38-39)
“…I even consider everything as a loss because of the supreme good of knowing Christ Jesus my Lord. For his sake I have accepted the loss of all things and I consider them so much rubbish, that I may gain Christ and be found in him…” (Philippians 3:89)
“But as it is written: ‘What eye has not seen, and ear has not heard, and what has not entered the human heart, what God has prepared for those who love him.’” (1 Corinthians 2:9)
…and in my difficulties:
“…but he said to me, ‘My grace is sufficient for you, for power is made perfect in weakness.’ I will rather boast most gladly of my weaknesses, in order that the power of Christ may dwell with me.’” (2 Corinthians 12:9)
“I know the one whom I have trusted and I am certain that He, the just judge, has the power to keep safe what he has entrusted to me until that Day.” (an antiphon from Morning Prayer, cf. 2 Timothy 1:12)
***
Additionally, today five American Archbishops received the pallium—a symbol of their “metropolitan” (i.e., extending over an extensive geographical territory comprising several dioceses) authority, and also of Christ’s “easy yoke”—in Rome from the Holy Father. 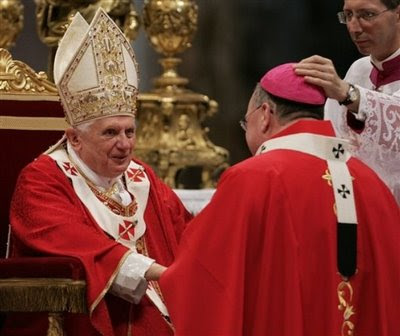 (Archbishop Dolan receiving the pallium as Archbishop of New York. H/t “Whispers in the Loggia.”)

I found this ceremony exciting to read about, not only because New York’s Archbishop Dolan was one to receive the pallium; but also because the pallium ceremony references consecrated virgins, albeit in a less-than-obvious way.

The pallium is a narrow band of cloth, decorated with six crosses and made out of white wool. And that wool comes, in part, from two lambs which are blessed every year on the feast of St. Agnes, who is perhaps the most emblematic of the Church’s early consecrated virgin saints. Archbishop Vigneron of Detroit, another recipient of the pallium, writes more about this here on his blog.

Even though I don’t think the Church explicitly describes this particular meaning of this aspect of the pallium ceremony anywhere, personally I like to think that the blessed wool in the pallium is symbolic of the way that consecrated virgins (and the Church’s consecrated women more generally) help support the hierarchical Church through their life of prayer, witness, and sacrificial love.

(N.b.: Our Vocation Director in New York gives a great interview about the significance of the pallium ceremony on our local news, which you can watch here.)

Posted by Sponsa Christi at 9:26 PM

I travel with you -

You are one with the Lord, Sponsa Christ.