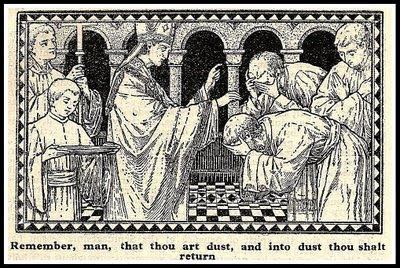 Here is the first section of one of my favorite poems, “Ash Wednesday” by T.S. Eliot. T.S. Eliot was born and educated in the United States, but later moved to England and became a British subject (and so both countries claim him as their own). He lived and wrote during the twentieth century, and his earlier poems aimed at capturing the sense of moral aimlessness that pervaded the culture of that era.

After a religious conversion, Eliot’s later poetry reflected his new-found spiritual insights; and, while still recognizing the reality of existential despair, his later poetry expressed to the reader the possibility of true and real redemption. (By the way, his later poems make excellent—if challenging—spiritual reading. Right now, I often bring his “Four Quartets” with me to the chapel when I make my Holy Hour.)

In “Ash Wednesday,” Eliot describes the banality and weariness of sin, but also alludes to the possibility of salvation, and poignantly expresses the need to “cast all our worries on God, because He cares for us.” (cf. 1 Peter 5:7)

Because I do not hope to know again
The infirm glory of the positive hour
Because I do not think
Because I know I shall not know
The one veritable transitory power
Because I cannot drink
There, where trees flower, and springs flow, for there is nothing again

Because I know that time is always time
And place is always and only place
And what is actual is actual only for one time
And only for one place
I rejoice that things are as they are and
I renounce the blessed face
And renounce the voice
Because I cannot hope to turn again
Consequently I rejoice, having to construct something
Upon which to rejoice

And pray to God to have mercy upon us
And pray that I may forget
These matters that with myself I too much discuss
Too much explain
Because I do not hope to turn again
Let these words answer
For what is done, not to be done again
May the judgement not be too heavy upon us

Because these wings are no longer wings to fly
But merely vans to beat the air
The air which is now thoroughly small and dry
Smaller and dryer than the will
Teach us to care and not to care
Teach us to sit still. 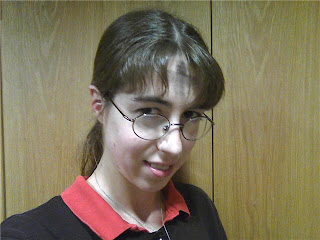 Just for fun...this is me with my ashes this year. The priest who gave me the ashes really got me good this time!

Posted by Sponsa Christi at 7:06 PM

Nice poem and nice cross of ashes! I had a friend who went to a different Catholic church than I did and she received a really distinct cross - it was clear and large - able to be seen from 10 feet away! My ashes look like I have a dirt smudge on my forhead!

Me again...I just wanted to have a cross that was distinguishable - it is a wonderful witness of Christ!

I know what you mean…last year I actually paid attention to which priest was making the best crosses, and then switched to a different line! But this year I got a got a good cross “fair and square.” :)

(smile) Last year and this Ash Wednesday I got the most beautiful cross of ashes I ever had. The priest is a very neat one… :)

How blessed we are to have Ash Wednesday, a time for reflection upon the depth of our Faith!
Armiger Jagoe, editor of
The Joyful Catholic
http://thejoyfulcatholic/wordpress.
com/