Last week, the father of Fr. Luke Sweeney—Vocations Director in the Archdiocese of New York and creator of “NYPriest.com”—entered into eternal life. As I was blessed to have known Mr. Sweeney personally (and in honor of this feast of St. Joseph the Worker, foster father of Jesus), I thought I would re-print this article as a tribute. It was written by Fr. Luke about a year ago for “Fathers for Good,” an initiative of the Knights of Columbus.

***
“Father of the Father”
My dad loves to recall a defining moment of his becoming a father late in life, at age fifty. His habit was to come home and read the newspaper, but when I was a toddler, I must have come over and swiped the paper out of his hands. The light went on in his mind and he realized that in my childlike way I was asking my dad to play with me. He took the hint and threw his heart into doing things with me then and throughout the years.

The presence of a father is invaluable in a boy’s life. As a vocation director I witness the wounds left when fathers are physically or emotionally distant from a young man. There can be anger that builds up, problems of relating in an appropriate masculine way and difficulties in school.

I have been blessed with my dad’s continued active presence in my life.

While my mother was more vocally and explicitly Catholic, praying with me at bedtime and listening to Christian radio, my dad’s presence was always quiet, but clearly there. At different times he offered words of wisdom. He taught me how to golf, threw the football with me, and even once dug up grass from the backyard for a history project.

A short while ago I asked my dad if he had ever stopped going to church over the years. He said never. What a wonderful job his family and the priests and religious sisters did for him when he was young! They set him on a good path and he never strayed.

My father has recalled for our family on numerous occasions his days in the U.S. Navy during World War II, and how incredibly quiet and focused the crew was before a battle. Most were deep in prayer, begging for grace and preparing for death. Perhaps his trust and reliance on God during those years deepened his commitment.

My dad’s presence and practice in the faith was never lacking. I always felt encouraged to get involved with the Church through his example. He was involved as an usher, volunteer for the Cardinal’s Annual Appeal, and as a parish trustee. He went to Mass, stayed afterward for the rosary each week and would go to Stations of the Cross during Lent. We also did these things as a family.

I began talking about the possibility of a priestly vocation in the sixth grade, and my dad took me to the seminary to meet the rector when I was a senior in high school. His words of wisdom were, “No matter what you decide to do in life, your mom and I will love you and support you!” What a sense of freedom to follow God’s will and not be forced to live out a parent’s preconceived plan for my life.

My mom died of a brain tumor right after I was ordained a deacon. My dad and I were present at her passing. Now that I am a priest, my dad has become a person that I talk to about how things are going (he constantly tells me to pace myself), but also someone I now pray with. We pray the rosary when driving together in the car, and sometimes I have the privilege of offering Mass in a hotel room when we travel together. Whatever the occasion, my dad is prouder than anything to be the “Father of the Father.”

Recently, we both went to confession while on vacation. Without missing a beat, he took from his bag a little old military prayer book from the 1940’s which he had used all these years to prepare himself for the sacrament. His strong and basic faith had seen him through battles, and it continues to guide, renew and nourish him daily. His love and devotion to Jesus and the Blessed Mother have had a great effect on my life, and there is little mystery that I was able to hear God’s call. 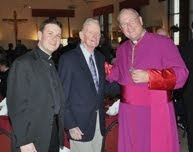 Posted by Sponsa Christi at 6:46 PM

What a lovely, lovely story. Thank you for posting it.