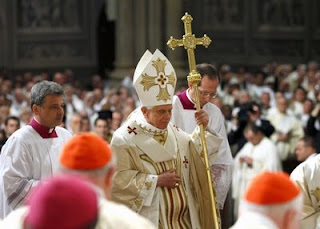 At the risk of “blowing my cover,” I wanted to write about how fortunate I was to have been able to attend the Papal Mass at St. Patrick’s Cathedral last weekend. It was such an amazing experience that it has taken me a week to “come down” enough to string some thoughts together coherently! (And I had a term paper due the next Monday, which I almost didn’t finish in time—I briefly found myself wondering whether or not “I was too much in awe of the Pope to write” would be a legitimate excuse.)

I knew it would be an impressive, once-in-a-lifetime opportunity to see the Pope on an American pastoral visit, yet I had no idea that seeing Pope Benedict XVI in person would have such an emotional effect on me. A month or so before the Mass my Dad said to me, “I bet you’ll feel something. It will be like a religious experience.” But I admit that I was fairly skeptical about this.

When the Benedict XVI walked into the Cathedral, I started crying and all the nuns around me started crying. As odd as it is to say this, the Pope really looked beautiful. It was almost as if he was glowing, he looked so happy. I kept thinking how truly awesome it is that God took a shy German seminary professor and gave him the grace to stand in the place of Christ on earth.

Besides the Eucharist, I think one of my favorite parts of the Mass was right before the final blessing, when the Holy Father turned and spontaneously addressed the assembly:

“At this moment I can only thank you for your love of the Church and Our
Lord, and for the love which you show to the poor Successor of Saint Peter. I
will try to do all that is possible to be a worthy successor of the great
Apostle, who also was a man with faults and sins, but remained in the end the
rock for the Church. And so I too, with all my spiritual poverty, can be for
this time, in virtue of the Lord’s grace, the Successor of Peter.

It is also your prayers and your love which give me the certainty that the
Lord will help me in this my ministry. I am therefore deeply grateful for your
love and for your prayers. My response now for all that you have given to me
during this visit is my blessing, which I impart to you at the conclusion of
this beautiful Celebration.”

Though the Pope’s homily was very moving and sincere, it was still something he had written beforehand. In this rare Papal ad lib, you could tell that his Holiness was speaking straight from his heart—something which just about melted mine. (As sentimental as this sounds, I wanted to give him a hug, but of course the Swiss Guard would have tackled me.) How marvelous to be told more or less directly by the head of the Catholic Church that your love and prayers are appreciated!

I can’t describe how precious of a gift it was to be a part of this assembly at the beginning of my consecrated life. I always knew and believed that I was a part of the Church which Jesus Christ Himself established (first through my baptism and soon more intimately trough my consecration), but now I feel that I have SEEN this reality with my own eyes.

*(the photo and the quote from Pope Benedict XVI were taken from the blog Whispers in the Loggia.)
Posted by Sponsa Christi at 7:10 PM