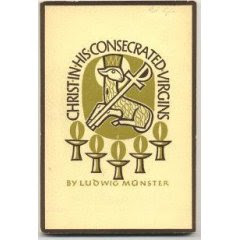 This is different from the vast majority of literature on the topic of virginity within the consecrated life in general, which tends to focus more on the theological identity of those under religious vows. Of course, there is a great deal of similarity and overlap between "liturgical" consecrated virginity and the religious vow of chastity. But an often misunderstood fact is that the Rite of Consecration to a Life of Virginity bestows a unique charism upon the recipient which is separate from religious profession. (One article I read described the consecration as relating to vows in an analogous manner to the way in which Ordination relates to vows.)

It was certainly a welcome surprise to find a book addressed directly to theology of my particular vocation. However, as the book was originally published in 1957, before the promulgation of the revised Rite and the subsequent provisions for consecrated virginity lived "in the world", this book is actually written for nuns (probably in Benedictine communities) who were to be consecrated some years after their perpetual or solemn profession. Consequently, Christ in His Consecrated Virgins does not refer to many aspects of consecrated virginity as it is expressed in canon 604 of the 1983 Code of Canon Law.

Christ in His Consecrated Virgins is structured so as to discuss various components of the vocation to consecrated virginity as they correspond to the different elements of the pre-Vatican II Rite of Consecration (which is included as an appendix). For example, the chapters have titles such as "The Call of Christ", "Litany of the Saints", and "Authorization for Reciting the Canonical Hours". One problem with this is that several elements of the older rite did not survive the revision called for by the second Vatican Council (such as the Anathema--which, if you'll pardon the colloquialism, I think was kind of cool!), and some of the elements described only occur when the virgin to be consecrated is also a nun.

But despite this slight obsolesces, I still find the format to be enriching and helpful--it certainly re-enforces the maxim "how we pray is how we believe". Further, it is not too difficult for me to see the similarities and parallels between consecrated virginity as it existed in 1957 and consecrated virginity as it exists in 2008. I think it will take me a few readings before I absorb everything Christ in His Consecrated Virgins has to offer.

I think it would be great if a companion book was written about the revised rite. Maybe my own weak attempts would make good future posts for this blog!
Posted by Sponsa Christi at 9:20 PM

Hmm... This book does seem like a good resource. I couldn't find it on Amazon (or anywhere else, for that matter), but perhaps I'll be able to get my hands on it somehow. (There's a religious community in Lafayette with a very nice library, and they may have it.)

It would be especially nice if there were a book, or even a brochure or bookLET for young women who are discerning this vocation, don't you think?

My apologies for the belated response to your comment!

You probably can’t find this book on Amazon because when I bought my copy, it was the ONLY one listed in the used books section. (Sorry!)

I did think about writing a book of some sort about can. 604, but I found that this type of project was too much to take on while applying to graduate school and finishing a bachelor’s degree. (Although it may make a good M.A. thesis.) But it did seem like a blog would be a fairly manageable medium…and hence, the genesis of “Sponsa Christi.” :)

If you have written reflections on the new Rite of Consecration, I would love to print them as a guest post—just send me an e-mail sometime.

You'll never guess which book I have now! :) I justified dropping fifty bucks for it (ouch) by considering the times I have bought textbooks more expensive than that and not really read them. Better be good! I am very satisfied with the condition, clean unfolded pages plus a surprise bonus hand-sewn clear plastic cover!