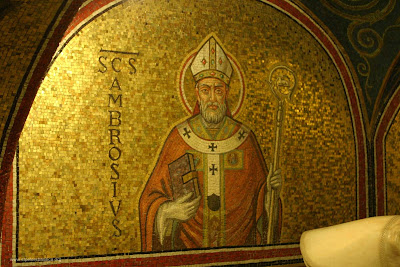 (This is a mosaic of St. Ambrose from the crypt in St. Peter’s basilica. Even though our saint looks sort of cranky in this depiction, his letters to the consecrated virgins of his era show him to be a warm and caring pastor.)

One common misconception about consecrated virgins is that we don't have our own spiritual heritage. It’s even been suggested that therefore we should all individually “borrow” the spirituality of whatever major religious Order most appeals to us.

However, so much as a cursory knowledge of the Patristic writers would reveal that we actually have one of the richest spiritual patrimonies in the entire Church! The Church Fathers (such as Sts. Ambrose, Augustine, Jerome, and so on) wrote beautiful and profound treatises on the nature of consecrated virginity. And while these of course can apply to women in a variety of forms of consecrated life today and throughout history, they were written specifically for and about consecrated virgins—women who had exactly the same vocation as my own.

Because extensive reading of the Church Fathers can sometimes seem daunting, I have decided to start regularly sharing and discussing various selections pertaining to consecrated virginity here on my blog, hopefully in a “user-friendly” format. But for more Patristic writings, check out the section labeled “Fathers” on the “New Advent” website.

This first section is from book I, chapter 3 of St. Ambrose’s treatise “On Virginity.” It was written to his sister Marcellina, who herself was a consecrated virgin. As a side note, this chapter is immediately preceded by an essay in praise of St. Agnes, which is now used in the Office of Readings on her feast.
(emphases, in bold, and comments in red, are mine)
***
Virginity is praised on many grounds, but chiefly because it brought down the Word from heaven, and hence its pursuit, which existed in but few under the old covenant, has spread to countless numbers.
“And now the love of purity draws me on, and you, my holy sister, even though not speaking in your silent habit, to say something about virginity, lest that which is a principal virtue should seem to be passed by with only a slight reference. For virginity is not praiseworthy because it is found in martyrs, but because itself makes martyrs.” (This thought-provoking quote is one of my favorite Patristic references to consecrated virginity. I find it significant that St. Ambrose could say this not too long after the initial widespread persecutions of the early Church by the Roman Empire.)

“But who can comprehend that by human understanding which not even nature has included in her laws? Or who can explain in ordinary language that which is above the course of nature? Virginity has brought from heaven that which it may imitate on earth. And not unfittingly has she sought her manner of life from heaven, who has found for herself a Spouse in heaven. She, passing beyond the clouds, air, angels, and stars, has found the Word of God in the very bosom of the Father, and has drawn Him into herself with her whole heart. For who having found so great a Good would forsake it? For Your Name is as ointment poured out, therefore have the maidens loved You, and drawn You. And indeed what I have said is not my own, since they who marry not nor are given in marriage are as the angels in heaven. Let us not, then, be surprised if they are compared to the angels who are joined to the Lord of angels. Who, then, can deny that this mode of life has its source in heaven, which we don’t easily find on earth, except since God came down into the members of an earthly body? Then a Virgin conceived, and the Word became flesh that flesh might become God.” (I like the way St. Ambrose is able to articulate the connection between consecrated virginity and the mystery of the Incarnation. While I had initially seen consecrated virginity primarily as a reflection of and participation in the Paschal mystery—which it of course is as well—I am happy to have grow in my understanding of the consecrated virginity’s deep relationship to the two “poles” of our Christian faith.)

“But some one will say: But Elijah is seen to have had nothing to do with the embraces of bodily love. And therefore was he carried by a chariot into heaven, therefore he appeared glorified with the Lord, (Matthew 17:3) and therefore he is to come as the forerunner of the Lord’s advent. (Malachi 4:5) And Miriam taking the timbrel led the dances with maidenly modesty. (Exodus 15:20) But consider whom she was then representing. Was she not a type of the Church, who as a virgin with unstained spirit joins together the religious gatherings of the people to sing divine songs? For we read that there were virgins appointed also in the temple at Jerusalem. But what says the Apostle? These things happened to them in a figure, that they might be signs of what was to come. (1 Corinthians 10:11) For the figure is shown in few, the life exists in many.” (In this discussion of how the Old Testament is fulfilled in the New, St. Ambrose also alludes to the theology which would describe a consecrated virgin as an icon of the Church.)

“But in truth after that the Lord, coming in our flesh, joined together the Godhead and flesh without any confusion or mixture, then the practice of the life of heaven spreading throughout the whole world was implanted in human bodies. This is that which angels ministering on earth signified should come to pass, (Matthew 4:11) which ministry should be offered to the Lord with the service of an unstained body. This is that heavenly service which the host of rejoicing angels spoke of for the earth. (Luke 2:13-14) We have, then, the authority of antiquity from of old, the fullness of the setting forth from Christ Himself.”
Posted by Sponsa Christi at 10:39 PM