St. Scholastica, The Rite of Consecration, and Religious Life 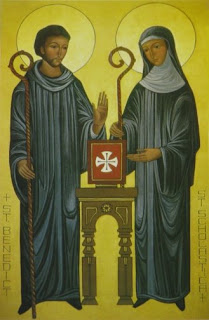 On February 10, the Church celebrates the feast of St. Scholastica. She was the blood sister of St. Benedict, and is most famous for founding the female branch of the Benedictine Order. St. Scholastica was born in Nursia, Italy around the year 480 A.D., and died in a monastery near her brother in Monte Cassino c. 547.

In the time of Sts. Benedict and Scholastica, there were already some forms of consecrated life in existence which could be seen as precursors to religious life, such as the various loosely organized communities of early desert hermits (the sort of which St. John Cassian discusses in his writings). However, “religious life” properly speaking describes a form of life based on adherence to a specific Rule of Life—the word “religious” is even derived from the Latin for “to bind.”

While St. Benedict’s Rule is not the earliest in the history of the Church, it was the arguably the most successful and widely-adopted Rule of its era. In this sense, Sts. Benedict and Scholastica could be considered the father and mother of western religious life as we know it today. We may also be able to call St. Scholastica the original nun.

But unlike many other great female foundresses, in addition to being a nun St. Scholastica was almost certainly a consecrated virgin as well (that is, a woman having received the Rite of Consecration to a Life of Virginity). In the Office of Readings for her feast St. Gregory the Great describes St. Scholastica as having been “consecrated to God from her earliest years,” so from this we may also assume that she was a consecrated virgin prior to her beginning monastic life.

And just as St. Benedict was originally a hermit who sought monasticism as a particular way of ordering his ascetical life, it may not be unreasonable to conjure that St. Scholastica embraced Benedict's Rule primarily as an aid to living out fully her original consecration as a virgin, as opposed to seeing the Rule and the Vows as the constitutive element in her consecrated life. This would be a contrast to later attitudes concerning consecrated virginity vis-à-vis religious life, which saw the Rite of Consecration is something more like the “crowning” of a monastic life well-lived.