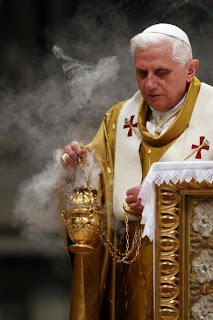 Right now, consecrated virgins from all over the world are gathered in Rome on pilgramage. (Although this aspiring consecrated virgin, as a soon-to-be graduate student, could only manage to be there in spirit!) They were able to have a special audience with Pope Benedict XVI, who gave them a very encouraging adress.

Here is the story, taken from Zenit.org:

VATICAN CITY, MAY 15, 2008.- The call to consecrated virginity has roots in the beginnings of evangelical life, and the Virgin Mary was its first fulfillment, affirmed Benedict XVI.

The Pope stated this today when he greeted 500 consecrated virgins today who have gathered in Rome for an international congress.

In his remarks to the members of "Ordo Virginum," or the Order of Virgins, the Holy Father, quoting the theme chosen for the congress, pointed out that consecrated virginity is "a gift in the Church and for the Church." He invited the women "to develop, from day to day, their understanding of a charism which is as luminous and fruitful in the eyes of the faith as it is obscure and futile in the eyes of the world."

"The Order of Virgins represents a particular form of consecrated life which flowered anew in the Church after Vatican Council II," the Pontiff explained. "However, it has ancient roots that go back to the beginnings of evangelical life when, in an unprecedented novelty, the hearts of certain women began to open to a desire for consecrated virginity: in other words, the desire to give one's entire being to God, which had had its first extraordinary fulfillment in the Virgin of Nazareth and her 'yes.'"

"Your charism must reflect the intensity, but also the freshness, of its origins," said the Pope, noting how, "when it came into being, the charism did not involve a particular way of life. Little by little, however, it was institutionalized, finally becoming a full public and solemn consecration conferred by the bishop through an inspirational liturgical rite that made the consecrated woman 'sponsa Christi,' an image of the Church as bride."

"Your vocation is profoundly rooted in the particular Church to which you belong," he told the women. "From the diocese, with its traditions, its saints, its values, limits and difficulties, you open up to the scope of the universal Church, sharing particularly in her liturgical prayer."

"In this way your prayerful 'I' progressively broadens out," the Holy Father continued, "until in the prayer there is nothing more than a great 'we.' In your dialogue with God, open yourselves to dialogue with all creatures."

"The choice of virginal life," the Pope concluded, "is an allusion to the transitory nature of earthly things and an anticipation of future good. Be witnesses of vigilant and industrious hope, of joy, of the peace that belongs to those who abandon themselves to the love of God. Be present in the world, yet pilgrims on the journey to the kingdom."

You can also read the complete text on Whispers in the Loggia, by clicking here.
Posted by Sponsa Christi at 10:23 AM

This is beautiful. I'm so glad Pope Benedict XVI did this. I hope it raises the awareness of this as a vocation. God bless you. :-)