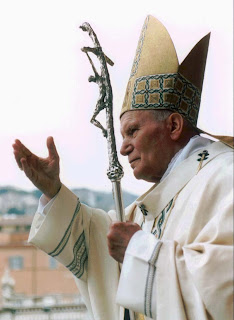 With Pope Benedict XVI's recent address to an international gathering of consecrated virgins in Rome, I thought now would be a good time to point out that consecrated virgins from around the world also convened in Rome in 1995 to celebrate the twenty-fifth anniversary of the promulgation of the revised Rite of Consecration to a Life of Virginity for Women Living in the World.

John Paul II also spoke to the consecrated virgins in very cordial terms. You can find the full text of his address on the USACV website, or read it by clicking here. Below, I have reprinted some of the highlights. The emphases, in bold, are mine:

"On my part, I would like to speak to you with the same affectionate warmth with which bishops of old used to speak to the virgins of their churches: for example, the warmth of Methodius of Olympia, the first cantor of Christian virginity; that of Athanasius of Alexandria and of Cyprian of Carthage, who considered consecrated virgins an elect portion of Christ’s flock; that of John Chrysostom, whose writings are rich in ideas to nourish the spiritual life of virgins. Ambrose of Milan, whose works bear witness to an extraordinary pastoral care for consecrated virgins; Augustine of Hippo, that keen, profound theologian of virginity embraced for the sake of the Kingdom of Heaven (cf. Mt 19:12); the great, holy Pontiff Leo I, with all probability the author of the admirable prayer of consecration Deus castorum corporum; and Leander of Seville who wrote a beautiful letter to his sister Fiorentina on the occasion of her virginal consecration. This is an episcopal tradition to which I willingly join myself."

"The mystery of the Incarnation was seen by the Holy Fathers in a spousal light, following
the interpretation given by the Apostle Paul on the Lord’s death: “Christ loved the Church and gave Himself up for her”...The entire life of Christ was therefore placed under the sign of the mystery of His nuptials with the Church (cf. Eph 5:32). You, too, dear Sisters, belong to that mystery through the gift of the Holy Spirit and in virtue of a 'new spiritual anointing' (cf. Pontificale Romanum, Ordo consecrationis virginum, n. 16)."

"Love Him as He desires to be love in your concrete life: “If you love Me, you will keep
My commandments” (Jn 14:15; cf. 14:21). Love Him as is fitting to your spousal condition: assuming His same sentiments (cf. Phil 2:5); sharing His way of life consisting in humility and meekness, love and mercy, service and joyful availability, untiring zeal for the glory of the Father and the salvation of the human race."

"According to the teaching of the Fathers, in receiving from the Lord the “Consecration of
virginity,” virgins become a visible sign of the virginity of the Church, the instrument of its fruitfulness and witness of its fidelity to Christ. Virgins are also a reminder of the orientation of the Church towards the future goods and a warning to keep this eschatological tension alive."

"Your total and exclusive love for Christ does not exempt you from love towards all men
and women, your brothers and sisters, for the horizons of your charity—precisely because
you belong to the Lord—are the same as the horizons of Christ."

"As St. Leander of Seville observes, Mary is also 'the culminating point and prototype of virginity.' In body and soul she was fully what you desire to be with all your strength:
virgins in body and soul, spouses through total and exclusive adherence to the love of Christ, mothers through the gift of the Spirit. "

Posted by Sponsa Christi at 4:50 PM